On Friday 27th January 2017, students from the maths sets 8.1, 8.2 and 7.11 attended a maths fair at the Centre for Life in Newcastle. There was a range of activities and puzzles to immerse ourselves in, such as making sausage dogs out of balloons and using maths in stargazing.

On Friday 27th January 2017, students from the maths sets 8.1 and 8.2 (who weren’t having a great time skiing) attended a maths fair at the Centre for Life in Newcastle.  Some year sevens also came on the trip but were placed in a different group. There was a range of activities and puzzles to immerse ourselves in such as, making sausage dogs out of balloons and using maths in stargazing.

The year eights started by playing a game that was based around probability and chance.  Each person had to stand on a number and whatever number was rolled on the two dice, the person standing on that number would be saved.  The winner was the team that saved all its people in the quickest time.  This was a very fun activity and we all looked stupid wearing the silly hats!

Next, we went upstairs where we all took the role of different planets.  We had to move from different planets to get back to our home planet but only travelling on the lines that were on the floor.  It took us twelve moves to complete this challenge and was all to do with logic and quick skills.  Also, we had to choose items which we could take on our journey to the other planet without going over the maximum weight of the spaceship.  There were items like matches and spare spacesuits. There was also an element of science in there because there is no oxygen in space to ignite the match.

As much as we would have liked to do that activity all day, we moved to the next activity.  When we got there, there were cards laid on the table and we played the person next to us.  We took it in turns to take either 1 2 or 3 cards at a time; the aim was not to be the person to take the last card.  Next, people moved from every table to play someone else and the team with the most points was the winner.  My table won of course!

All the activities had something to do with maths and the next activity definitely did.  It was proportional maths where we made dog balloons.  The balloons had to be blown to just the right length to make it perfect.  It then had to be split up into equal parts to get the right lengths for the legs and arms, not to mention the long tails.

After lunch, it was straight back upstairs for a carousel of maths riddles and puzzles.  Some of them required a hands-on approach while others needed immense concentration.  It was a lot of fun because we could go around by ourselves trying to solve a range of maths puzzles.  The time flew by and we were soon leaving for the next activity which was a bit like the first.  It was another probability and chance based puzzle.

There was a grid laid out on the floor and everyone picked a number from one to twelve.  Every time your number was rolled by the two dice, which meant that if you were number one, it was impossible to advance from the first square, you would move forward one space.  The first person to get past the last square was the winner.  After we had played the rather unfair game once, we then played it again but with slightly different rules.  Depending on how likely your number was to be thrown, you would stand back the furthest.  This meant that if you were number two of twelve, you were only one square away from the finish line which made the game fairer but easier if you were less likely to get rolled.  It was very interesting learning about probability tables but, in what felt like no time at all, we reached the end.  We still had one more activity left and this was in the planetarium.

Everyone was in awe of the comfy seats that we could recline into with the screen filling the ceiling.  Using angles to find positioning of the stars in the sky and navigating was, in my opinion the best activity of the whole day.  We learnt how to find the north star, Polaris, using our hands as protractors as well as star formations in the sky.  Everything on the world has something to do with mathematics and the night sky was one of the best examples of it.  This was the best activity!

All too soon it was the end of the day and it was time to travel back to school on the Metro.  It had been a very fun day and we all could have easily completed the activities on that trip again.  When we got back to school we all realised it was Friday and that we could all go back home and relax over the weekend.  Maybe we could do some stargazing that night, at least I know how to find the north star! 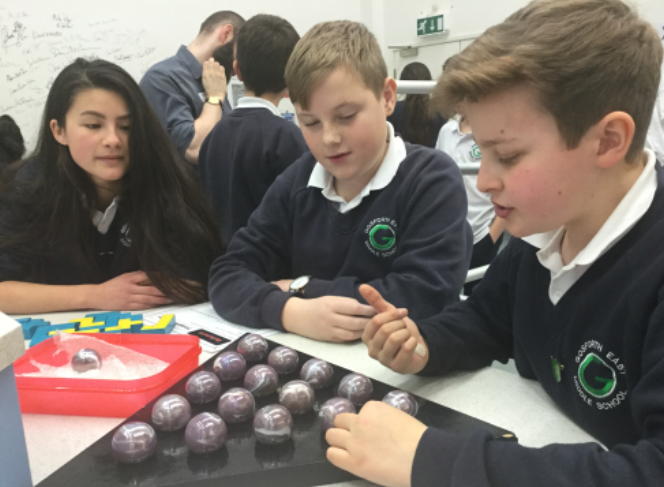 In the room of puzzles - it's not as easy as it looks.