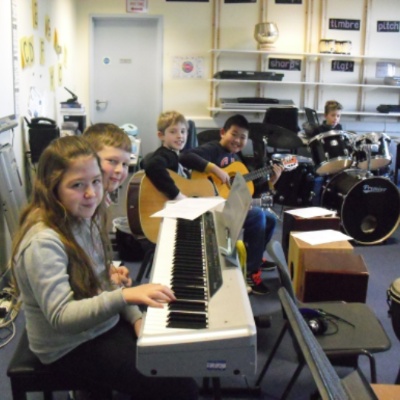 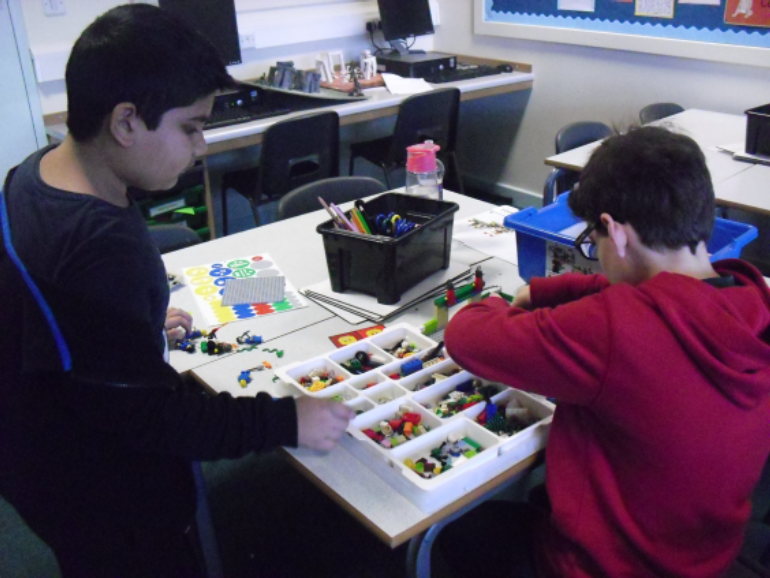 This is what some of the pupils said about their experiences…

One of the activities on No Pen Afternoon was table tennis when everyone had lots of fun playing table tennis for twohours with friends. There were six tables and from 20-30 people participated. Most of the time people were playing doubles or singles but some people were playing a game we call ‘Around the World’. Lots of people were very talented at table tennis and were hard to beat. Mr Jordan was also playing matches against other students and mostly won! At the end of the afternoon everyone was saying how fun this activity was and that they would definitely do it again. 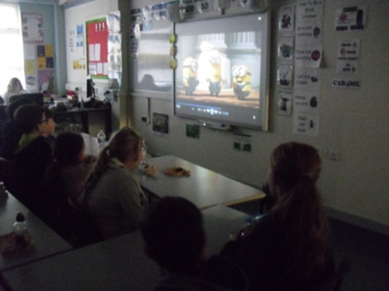 Another popular activity was film. We were allowed to bring a small packet of sweets and a drink and move our chairs around to get to the front of the room and be with our friends. The children from Key Stage Two and Key Stage Three were split up as the children from Key Stage Three were allowed to watch older rated films. We watched ‘Minions’. I don’t want to give away any spoilers but it was extremely funny and it was fantastic. There was a little time left after the film so we could watch part of another film, called ‘Cool Runnings’; we didn’t get to finish that one but I will watch the rest at home to see how it ends. The afternoon was over too quickly but we all loved it.

During No Pen Afternoon, a number of pupils went to the Dining Room to do Disco Dancing with Mrs Skelton. Firstly, they danced to the popular hits like Uptown Funk and That’s My Girl. After that, in groups of 6 or more, the students choreographed their own dances and Mrs Skelton videoed their groovy moves. 5NSK is where they headed to next and there they listened to any music of their choice such as PPAP and All My Friends (Jacob Sartorius). Then Mrs Skelton brought out SWEETS! Unfortunately, the school bell went after that which meant the fantastic fun was over but everyone had a whale of a time and enjoyed it very much.

By Georgie and Alice, 6HT. 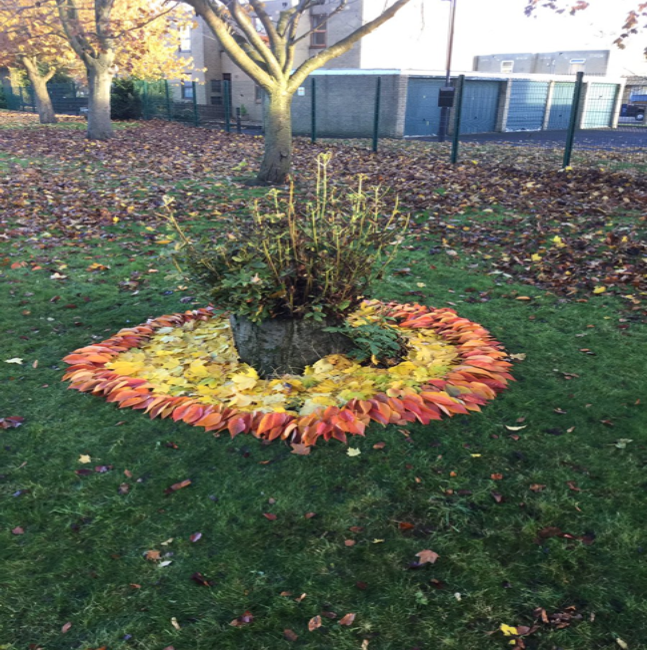 Our tribute to Andy Goldsworthy

First the 13 people in the group put on waterproof gloves and ventured outside into the front of the school. We all worked together in clearing a space around a tree stump. Our aim was to replicate one of the works of art of Andy Goldsworthy, best known for creating art out of natural objects. We gathered all of the fallen yellow leaves into one big pile. Afterwards, the group put all of the leaves around a tree stump facing outwards. We did the exact same but with red leaves then we took a photograph. By this time my hands were numb they were so cold from the rainwater which was on the leaves.

For the second hour of the afternoon, we went inside and drew with a pencil (not a pen). We took an item from the woods or a treasure from the sea and drew still life.

My reaction when I first heard the idea that Mr Rawlinson had in mind was ‘How are we meant to do that?’ but it turned out well in the end. All in all the experience was freezing and fun. 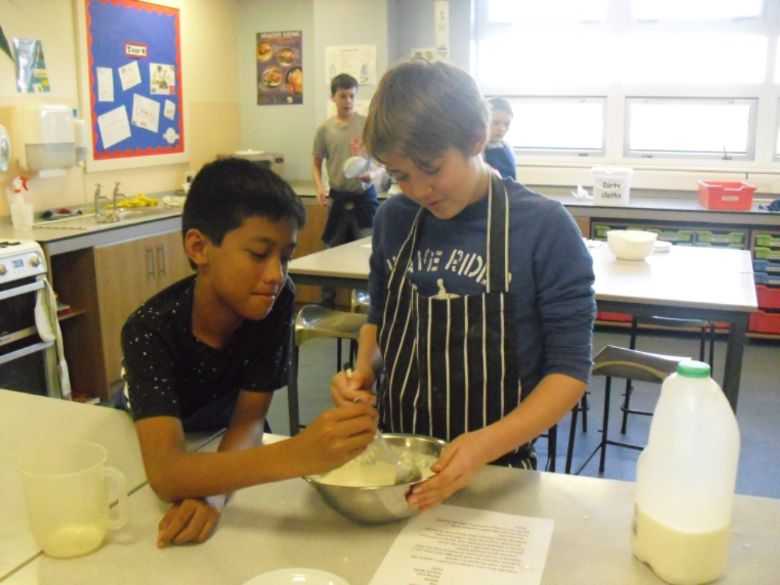 Making the batter for the crepes

During No Pen Afternoon approximately 40 people took part in French cooking and food tasting. At the start of the event we were split in half. Each half took it in turns to try numerous foods from across the globe (but mainly from France) then made some treats of their own.

We tried many different delicacies such as Nutella, croissants, different meats, cheese and many more. One of my favourites was the olives from Spain which had pimento inside and a cheese that went with them.

Meanwhile, the other half was making crepes with a citrus sauce.  The Year 5s and 6s were in charge of the sauce, and 7 and 8 took care of the batter. Then, we had to cook our batter in a frying pan, but KS2 had a little help. The crepes were absolutely delicious.

Nearly everyone who took part tried something new and discovered that they liked things that they had previously turned up their noses at!

A Dramatic Afternoon...OH  yes it was 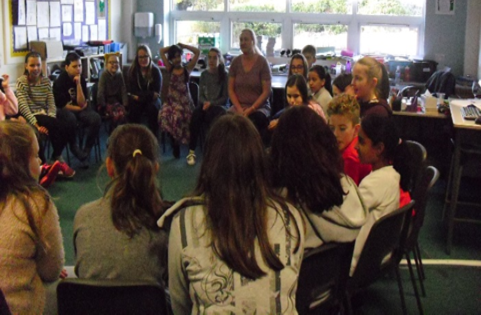 Many children from each year group chose drama as their activity for the No Pen Afternoon. We started off playing some extremely fun games. The game we started playing was wink murder. I think most people know this game but I will remind you how to play. First you pick a detective. The detective leaves the room while a murderer is picked. The murderer winks at someone and that person dies. NO! I DON’T WANT TO DIE. You have to act dead for the rest of the round. The detective has to find out who the murderer is. The next game we enjoyed playing was called ‘The Wind Blows’, which is when someone stands in the middle of the circle and says ’the wind blows to anyone who is…’ then you will say something like’ if you are wearing blue’. If you were wearing blue or whatever the person said, you would stand up and run to another spot though you are not allowed to go to the seat right next to you which is classed as cheating. If you can’t get a seat you will be the one in the middle to say the wind blows. After that game we played,” Fortunately, Unfortunately,” You throw a ball at someone and say fortunately or unfortunately.

After all the games we learnt about the type of drama we were going to be doing which was a pantomime. OH no we didn’t! OH yes we did! Our pantomime, performed in groups of six, was ‘Cinderella’ with Buttons, the Ugly Sisters, the Ugly Stepmother, the Prince and, of course, Cinderella.  There was a lot of comedy, silliness and over-acting. It was an extremely fun way to spend the afternoon. 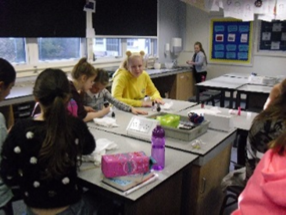 On No Pen Afternoon some of the girls chose to do beauty treatments. We soaked our nails in warm soapy water then some girls had their nails painted while others had a French manicure.  Emma said “it was so fun and was my first time doing anything to do with beauty.”

We then put some cream on our faces that felt like it had sand in it. The purpose of that was to exfoliate (this was a new word for us!) our skin to make it smooth. We finished off with moisturiser. We all enjoyed our afternoon of pampering. 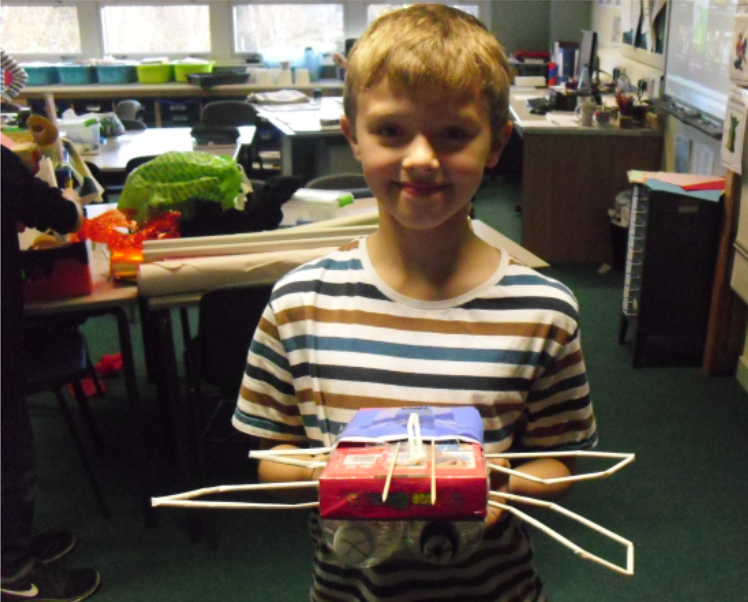 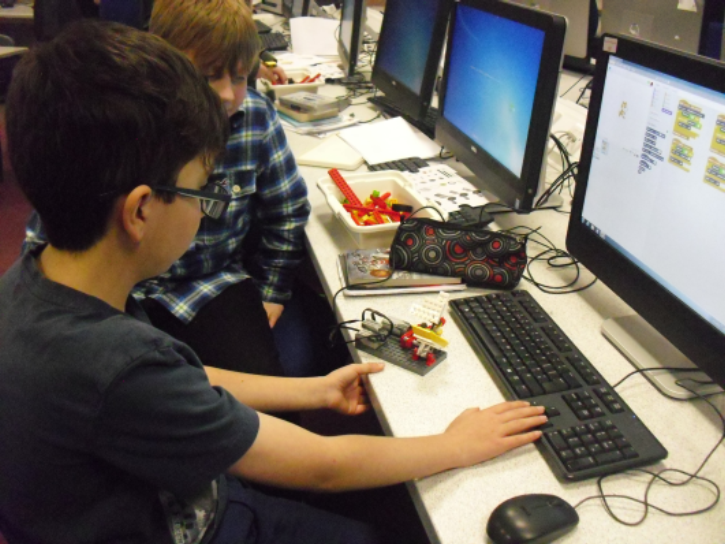 Building (and programming) a robot with LEGO 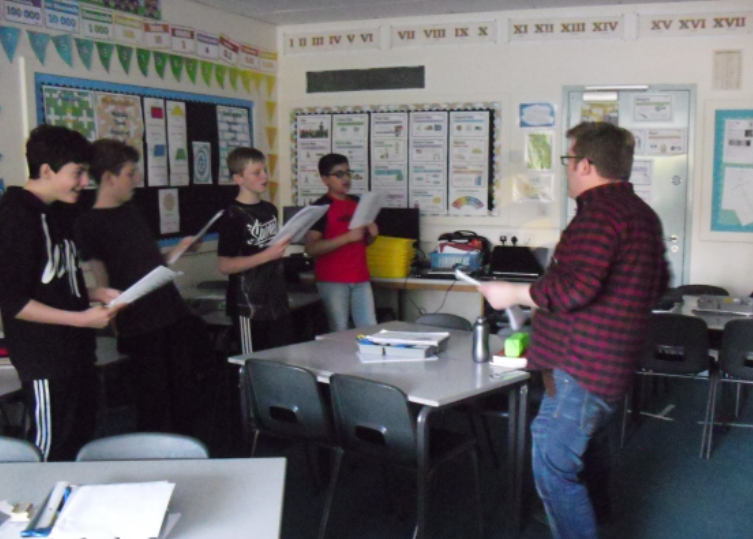 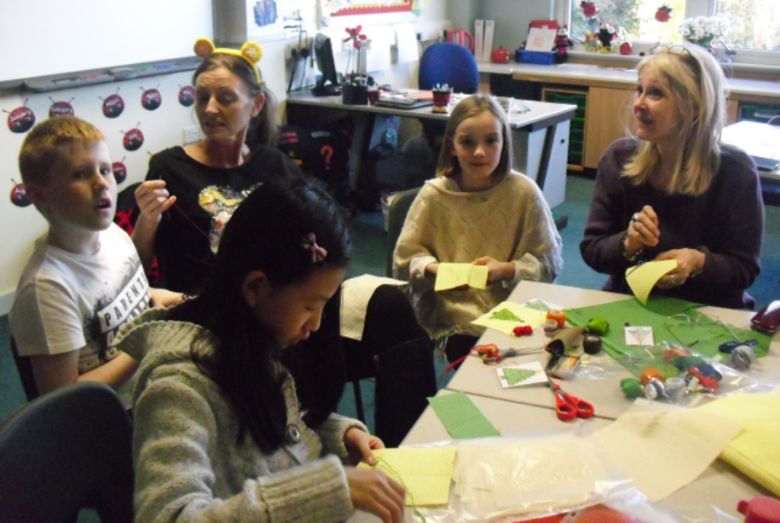 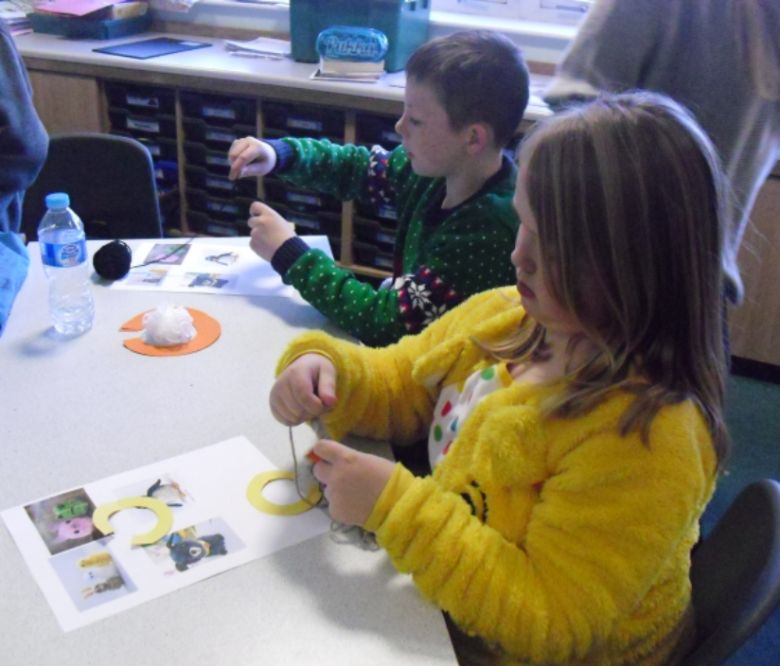 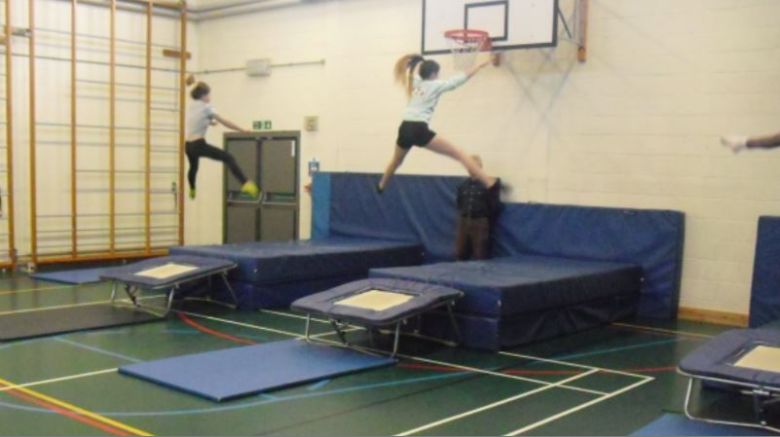 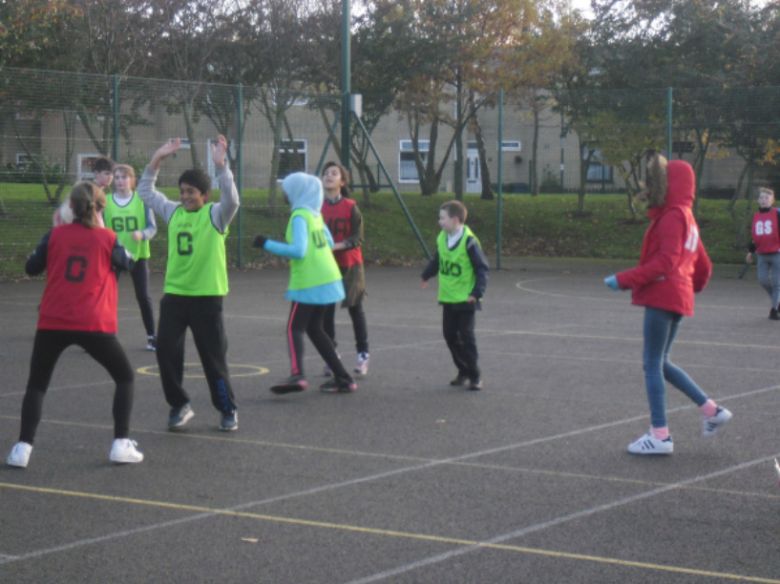