Travelling Back in Time to the Romans 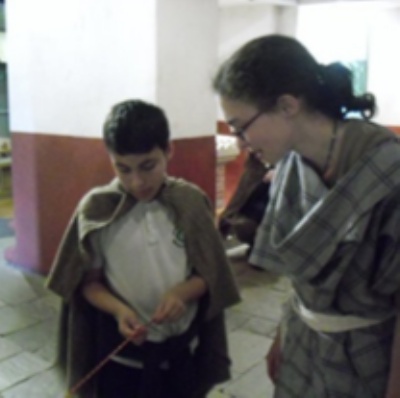 As promised... More about Segedunum: When Year 6 went to Segedunum we were all so excited and our first view of the site was breath-taking.  The staff there welcomed us with open arms and there were lots of things to do. 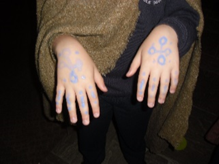 As promised... More about Segedunum:

The Romans…brutal, ruthless but organised and civilised.  And that’s why it’s so fun to learn about them. When Year 6 went to Segedunum we were all so excited and our first view of the site was breath-taking.  Who knew a place where war took place would look so beautiful? The staff there welcomed us with open arms and there were lots of things to do. We weaved pieces of wood together, painted our hands with Celtic patterns, which really put our artistic skill to the test and, to really feel the Celtic mood, we put on some, really ugly but comfortable robes and bracelets that matched. We learned a lot during our visit and  explored the lives of the Romans and the Celtic tribes.

When we were exploring the Celts, we learnt about a lot of objects including the golden torc which was an object that you would wear when you were an official. We also learnt that when the Celts went into battle they decorated their body with blue paint to scare their opponents( ours didn’t look so scary).  We also learnt how to make colourful bracelets and a tiny bit of a house. We had a sort of stand and lots of strips of wood which we weaved to create walls. We also learnt the oath, which we said when we were made Celts. LONG LIVE CELTS.

After being made Celts we headed to the Roman ruins. We explored the grounds and some lucky children got to pretend to be Roman slaves. After the tour of the Roman home, we headed to a part of Hadrian’s Wall where we were separated into 2 groups, 1 up on top of the wall – the Romans armed with plastic balls (stones) – and the unarmed attacking Celts at the bottom of the wall. The Celts charged at the wall while the Romans threw the ‘stones’ at them.

It was extremely fun and we  can’t wait to go again. 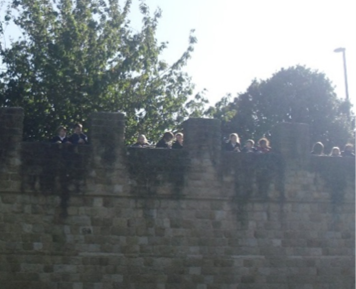 Romans with their 'stones' ready for battle 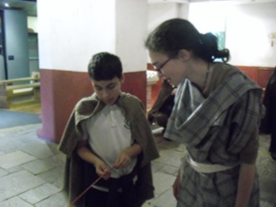