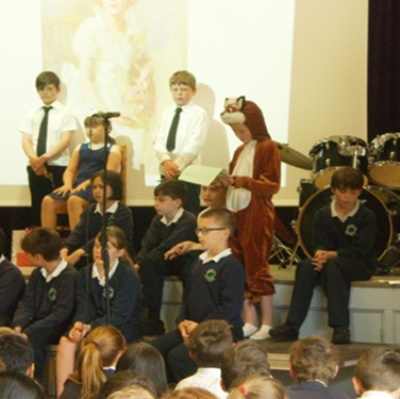 Class 5AW presented an assembly on the 18th of May focused on the queen because this year she celebrates her 90th birthday.

A talking dog!  You’ve now seen it all.

Class 5AW presented an assembly on the 18th of May focused on the queen because this year she celebrates her 90th birthday. The class had been practising hard including the queen- Ella, 2 corgis- James and Libby,  4 present givers- Aria, Isaac, Charlotte and Joshua and 2 guards - Patrick and Seb. All of the children delivered their lines with loud voices and brilliant expression. They told the queen’s life story and included some strange and little known facts for example that the queen owns all of the swans in England. The assembly ended with a surprise announcement. After reading a very persuasive letter sent by 5AW, Mr Stout gave permission for us to hold a street party to celebrate the queen’s birthday on Thursday 9th June. We decided on this event because it is a traditional way to celebrate national events. There were lots of activities including; inter-class rounders, a Great British Bake Off style contest, croquet and  a quiz about the queen to name a few.

By Ella and Katie Year 5