An Audience with Peter J Murry

Spine-chilling author Peter J. Murray visited KS2 on the 14th March and shared his horror-filled books with everyone. 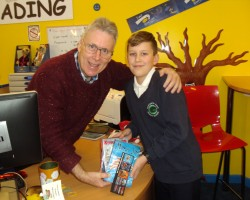 Adam is obviously a big fan!

Spine-chilling author Peter J. Murray visited KS2 on the 14th March and shared his horror-filled books with everyone. He even shared a few of his spooky book-writing secrets! Peter has written a ton of bloodcurdling books. Each spooky tale is unique and includes a different aspect of horror. Some of Peter’s books are  ‘PS13’, ‘Ten O’ Clock Caller’, ‘Scabbajack’, ‘Bonebreaker’, ‘Dawn Demons’ and ‘Krushmister’.

Bethan, who has read his books, says “I never want to put his books down.”
Phoebe, who is also a fan, says, “I think they are really creepy! I loved all of them.”
Ella said, “They were really scary. After Peter talking about ‘Ten O’ Clock Caller’, I was terrified!
At Ten O’ clock, I heard footsteps coming up the stairs (like in the book)… it was my Mum and Dad!”
In lessons 4 and 5 on the 14th March, 6.1 English group met Pete (as he likes to be called) for a workshop. He told us about his book ‘PS13’, which is 13 books in one! In fact, Pete only wrote one (PS 13) and 12 American children wrote the rest! The lucky children, whose stories were picked, went to a scary New York restaurant. This spine-chilling place was where they had a meal. Pete told us about the wax figures which terrified HIM!
Pete also told a terrifying, true story about how he was challenged by some people to sleep for one night in a haunted house in America! It is said that the unfriendly, ghoulish ghosts of a dead family still live there today and haunt the house. Peter said, “If you look through a mirror, you can see ghost children behind you!” Peter also mentioned how the family’s Dad died on one of the stairs and everyone who steps there trips up!
Pete’s book, ‘PS  13’, is about him and Cath going to a school called PS 13. They went in a taxi and the driver said he’d wait for them because there were lots of gangs around who might harm them. They went around the back of the school and saw a gate with lots of ivy growing on it. They went into the school but there was nobody there. They found the auditorium but again there was nobody there either; they decided to set up the power point anyway. Soon, some children with smoke around them came in. They sat at the back of the auditorium and asked: “Why didn’t they come to save us?” and Pete and Cath ran…
You’ll have to read the book to find out what happens next!
By Ella, Freya, Megan, Emma and Sophie