On Friday the 4th of March, Year 5 gathered in the hall for food day. The Food Education Company had come to do some cookery with us. The chef, Chef James from Birmingham, made 4 dishes with us. 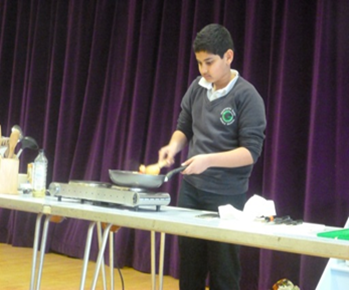 On Friday the 4th of March, Year 5 gathered in the hall for food day. The Food Education Company had come to do some cookery with us. The chef, Chef James from Birmingham, made 4 dishes with us.
The first was Chicken Tikka Masala which is from Birmingham. It had onions, garlic, chilli, coriander, crème fraiche and chicken. Some volunteers chopped and peeled the ingredients and put everything in the pan. Whilst some children mixed the food as it was cooking, Chef James talked to us about sugar. Then the Chicken Masala was finally ready to eat. Everyone tried the dish and I thought it was ok but it was way too spicy for me! 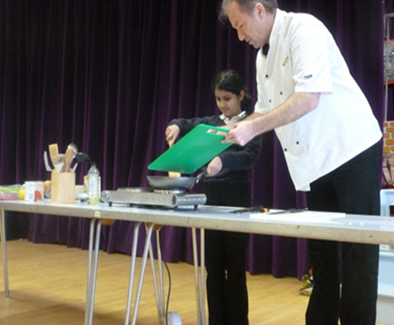 Then we learnt some scary facts about the amount of sugar in some of the food stuffs we eat. Chef James showed us how much sugar was in ketchup which was 30, cola with 20 and Strawberry jam. Shock horror! It was 50!!!!
Then we moved onto the next dish: Gazpacho from Spain. Chef James told us that Gazpacho is full of vitamins and is amazingly delicious. In went spring onions, chopped tomatoes, half a cucumber, some garlic, red pepper, basil, a bit of water, ANOTHER spring onion and some chillies. . This recipe was very simple, chop everything up and pop into the blender; the mixture turned a creamy brown. Finally, we got to try the Gazpacho and it smelled absolutely delish but it tasted so plain with no flavour even though it had a lovely exotic smell. Where was the salt and pepper when you needed it? 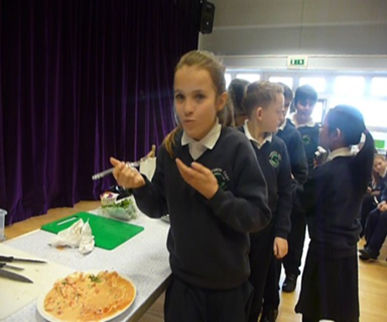 Italian meatballs came next. The ingredients were minced beef, chopped tomatoes, onions, basil and garlic. First, we rolled the beef into little balls (don’t worry, we did wash our hands thoroughly). Then chopped tomatoes were poured into a bowl and the onions were chopped and put into the pan. The meatballs were fried in the pan for 10 minutes and garlic was chopped and added to the sauce. Finally, the heat was turned down and the meatballs were presented on the plate with the sauce poured on top. Sadly, there weren’t enough meatballs for everyone but the sauce was tasty too. 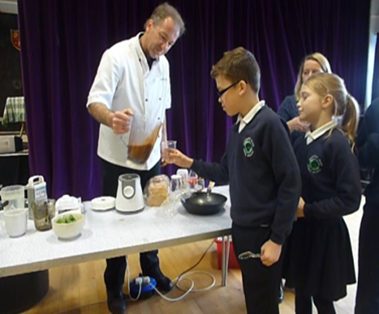 Gracias for my Gaspacho

Last but not least, Japanese stir fry noodles; we really were travelling the globe.  The ingredients were egg noodles, king prawns, egg, tofu and a separate vegetable stir fry. Firstly, some of the vegetables were poured into the pan with the king prawns. The egg was cracked into a bowl with the egg noodles, put in the pan and left to cook. When it was ready, we added a square of tofu. Surprisingly, it was actually quite tasty. 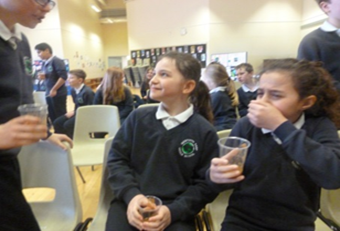 Did you enjoy that Sajaa?

After lunch, we played a quiz to see how much we had learnt. The score was very close but the winning team was the bananas with 18.5 points.
We all enjoyed the day and especially the stir-fry. DO try some of these dishes at home.
By Katherine and Sana, 5ND